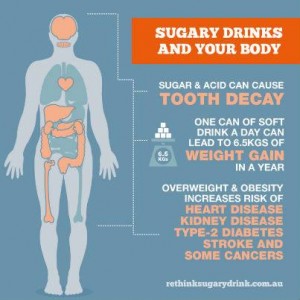 It won’t come as a surprise to anyone that Australians drink a lot of sugary drinks.

In a bid to reduce the health impacts of these beverages, Rethink Sugary Drinks, a partnership of 12 health and community organisations including the ADA, is encouraging workplaces to get healthier. If you are wanting to reduce your sugar intake come in and talk to one of our practitioners.

Among the suggestions are better offerings in vending machines, giving employees easy access to drinking water and in-house awareness campaigns.

Find out more about this great campaign.

Australians drink a lot of sugary drinks a year, placing us in the top 10 consumers of these unhealthy beverages in the world.

The health implications of this consistently high level of consumption are considerable, ranging from an increased risk of tooth decay and obesity through to type 2 diabetes, heart disease, stroke and some cancers.

In a bid to reduce the health impact of these drinks, Rethink Sugary Drink, a partnership between the ADA, Cancer Council Australia and 10 other health and community organisations, is working to educate Australians on the dangers posed by a diet of sugary drinks and the benefits to be gained by switching to water and reduced-fat milk.

The latest focus of the campaign is reducing the prevalence of sugary drinks in Australian workplaces, encouraging companies to create a healthier environment for their staff.

Among the suggestions are:
* Reducing the exposure of sugar-sweetened drinks in canteens or cafeterias, and giving preference to water or unsweetened drinks.
* Only providing water at functions or meetings.
* Giving employees easy access to tap water or a water cooler.
* Placing Rethink Sugary Drink posters throughout the workplace.
* Giving a Rethink Sugary Drink presentation to staff.
* Either removing vending machines entirely or re-stocking them with healthier alternatives.

Companies are also being encouraged to raise awareness of the campaign through their social media accounts, newsletters, blogs, websites and intranet and to document and report any success they have in creating a healthier workplace to Rethink Sugary Drink via rethinksugarydrink@cancervic.org.au